Now there’s 7000 KMs of war and desert and seas between myself and everything I ever knew … And that’s fine. 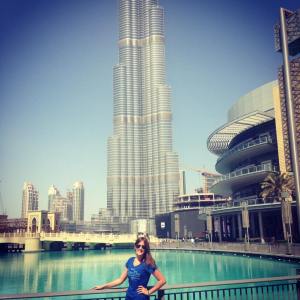 There’s far worse places to be marooned than Dubai:  My classroom no longer looks out over a Surrey council estate, but at the spire of the world’s tallest building. There’s a pool on my roof. I’m not allowed to carry my bags up to my room without a concierge throwing a cardiac arrest at me. Mcdonald’s will deliver to my door!

Yes, everyone tells you it’s going to be hot… But unless you’ve ever stuck your face in lava or been to the sun then it’s hard to comprehend. It’s a constant hair-dryer up your nostrils; a singeing-off-your-eyebrows-extravaganza, – a continuous smothering hug from a huge, sweaty man. As you step outside the heat hits you the way Mike Tyson would – brutally with the suggestion it might even rip off your ears.  But I can’t get enough of this abusive warmth – to the extent that I like to turn off my air-conditioning and leave my balcony doors open at night, confident in the trust I won’t wake up to drizzle. 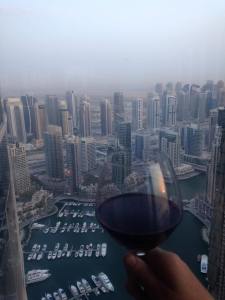 I’ve never had a balcony before. And now I like to sit there all evening (like some rubbish Juliet) and order Burger King online and reminisce about stars and bacon. Because here, there’s a sun that sets so quickly it looks like it’s falling right out of the sky, and a moon so big it blinds you… yet you can’t see the stars because the sky is full of dust, and it’s cheaper to buy large diamonds than it is to purchase bacon (and sadly diamonds don’t taste half as good) … So I’m stuck in some starless bacon-rehab, where the sea’s so warm it feels like pee… And I love it.

I don’t care that the sand gets in every orifice, or that I can’t watch The Great British Bake-Off without performing several illegal acts… because I’m in one of the most exciting places on earth. Everything is so much bigger, hotter, less finished than in the UK; it’s like the middle-east and America got married, the handsome love-child of Arabia and the West, where the Nando’s are full of abayas and dishdashes; the mosques are gleaming with Rolexes; there are Ferraris on the highway with jaguar cats in the passenger seat!

It’s still very much a frenzied work-in-progress as it battles to be finished for Expo 2020: the view from my apartment is a half-built amphitheatre, like some modern Romans just got up and left. There’s also a quarter-built tower-block and a semi-finished road outside…  it looks exactly how you’d imagine a Dystopian teen novel would (thankfully without all the child deaths and sexual tension). .. but I adore it, because at least I’m one step further away from dying in the Home Counties.