I hated St. David’s Day when I was a kid.

For a start? Your mum dressed you up in a ridiculous outfit.
Here I am, aged 3, in my Welsh costume: 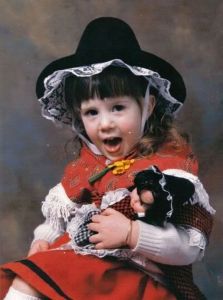 I was a Tom Boy. I climbed trees, kicked kittens, and ate grass: I did not appreciate a dress and frilly hat. Vegans would be more excited about donning fancy steak scarves than I was about wearing a flowery shawl. I might have only been a baby but I KNEW I looked like a twat. I was small, not blind.

Welsh national dress is just NOT hot, despite some tragic attempts to make it so: Y

et every year on March 1st, little Welsh girls are paraded about the streets in the apparel of their ancestors. The English don’t do this. You don’t see the children of Kent frolicking about in Roman togas or Viking helmets. Royal-Tunbridge-Wells would shit itself.

Little Welsh boys get off slightly easier; they’re expected to wear Rugby jerseys every March 1st. Though someone at some point must have decided that a Welsh rugby shirt just wasn’t Welsh enough for the occasion of the Patron Saint, and that something BIG and WELSH had to get stapled to the front. Oh, Tom Jones is busy? Then let’s make it a massive old leek! Preferably the most massive old leek West of Bristol. If it is more massive and old than the child? Even better!

My brother used to eat the leek safety-pinned to the front of his shirt every year. And every year he’d find himself throwing it up. So patriotic, he was sick: Now that’s an image that would make any Welsh parent proud.
One year? A boy from my class was forced to school as a Dragon. This was an instance of his mother taking Nationalism too far, and he never lived it down.

So. As a Welsh child on St. David’s Day you’d get shunted off to lessons in your traditional garb, have Cawl and daffodils forced down your throats for lunch, then you’d culminate the afternoon with an Eisteddfod.
Yeah, you try and wrap your weak Saxon tongue around that bitch! An Eisteddfod! Basically? A concert. Where everbody sings songs in Welsh. Which is brilliant, as nobody at my school understood a word of Welsh.

My favourite St. David’s Day medley was called “Sosban Fach,” which roughly translated means “BIG SAUCEPAN. Or maybe it’s “LITTLE SAUCEPAN”? Who knows? It doesn’t matter, all that is of concern here is the fact there’s an unfortunately-sized kitchen utensil and somebody ends up burnt! I recall another awesome St. David’s Day song about some cats who went to the forest and lost their shoes, but that got banned from Eistedfod because we got so excited singing it that somebody broke their arm.

Every year we’d all get shuffled into the assembly hall to chant about this crap. Sometimes there were poetry competitions, and the winner was always the kid who wrote the most Anti-English poem. I’ll have you know that kid was always me. One year I wrote a rhyme so pretentious and violent that it was put on display in County Hall.

During one particularly feisty Eisteddfod we were read a translation of Armes Prydain, a ballad penned in the 11th Century which prophesizes how the Celts will oneday rise up and force those naughty Anglos back into the sea from whence they came. We were then encouraged to interperate this notion through CREATIVE DANCE. That’s right: 150 Welsh kids drowning the entire English nation in the ocean with a shimmy and a twirl. School in Wales was all about inciting racial hatred. The Third Reich got nothin’ on us.

St. David’s Day was and is all about celebrating NOT being English. Sometimes? They dye the water in Swansea City Centre’s Fountains RED for the occasion, meant to symbolize the red of the dragon and the blood of the patriots. But it looks more like a scene from the Plagues of Egypt, just with chavs substituting the locusts and fake tans taking the place of boils.

In Cardiff there’s a parade, and up North in Angelsey they possibly burn any one who’s ever been to London. It’s not quite as drunk as St. Patrick’s Day, but it definitely kicks St. George’s Day’s pen-ol! 😉